A. high amounts of salt had diffused into the fish's cells, causing them to swell and lyse

B. loss of water by osmosis from cells in vital organs resulted in cell death and organ failure

C. the kidneys were not able to keep up with the water removal necessary in this hyperosmotic environment, creating an irrevocable loss of homeostasis

D. the gills became encrusted with salt, resulting in inadequate gas exchange and a resulting asphyxiation

201) Which of the following animals generally has the lowest volume of urine production?

A. salmon in fresh water

B. a marine bony fish

B. only II and III

D. only I and III

A. bladder from uric acid and water

B. liver from glycogen

A. the primary nitrogenous waste product of most birds

B. the primary nitrogenous waste product of most aquatic invertebrates

205) Which nitrogenous waste has the greatest number of nitrogen atoms?

A. a moist system of burrows, such as those of naked mole rats

B. a terrestrial environment, such as that supporting crickets

C. lots of seawater, such as a bird living in a marine environment

D. lots of fresh water flowing across the gills of a fish

A. a condition of insatiable thirst and excessive urine formation

B. gout, a painful inflammatory disease that primarily affects the joints

A. is the major nitrogenous waste excreted by insects

B. is metabolically more expensive to synthesize than urea

D. is soluble in water

A. urea is less toxic than ammonia

B. urea does not affect the osmolar gradient

C. less nitrogen is removed from the body

D. urea can be exchanged for Na+

210) In animals, nitrogenous wastes are produced mostly from the catabolism of _____

A. phospholipids and glycolipids

B. triglycerides and steroids

A) is readily soluble in water.

B) is metabolically less expensive to synthesize than other excretory products.

212) Among the following choices, the most concentrated urine is excreted by ____

213) African lungfish, which are often found in small stagnant pools of fresh water, produce urea as a nitrogenous waste. What is the advantage of this adaptation?

A) Small stagnant pools do not provide enough water to dilute the toxic ammonia.

B) Urea takes less energy to synthesize than ammonia.

215) Through studies of insect Malpighian tubules, researchers found that K+accumulated on the inner face of the tubule, against its concentration gradient. What can you infer about the mechanism of transport?

A) Potassium transport is a passive process.

B) Movement of potassium into the lumen of the Malpighian tubules is an energy-requiring process.

216) A potassium ion gradient is set up in insect Malpighian tubules through an active transport process. As a result,potassium concentration is higher in the lumen of the tubules than in hemolymph.How would the potassium gradient affect water movement?

A) Water would be forced out of the lumen of the Malpighian tubules through an osmotic gradient.

B) The potassium gradient would have no effect on water movement.

C) There would be a net movement of water into the lumen of the tubules.

D) Water would be conserved, forming a hypertonic solution in the Malpighian tubules

217) Why are the renal artery and vein critical to the process of osmoregulation in vertebrates?

A. The renal artery and vein are the main pathways regulating how much is produced by the kidneys

B. the kidneys require constant and abnormally high oxygen supply to function

D. The kidneys require higher than normal levels of hormones 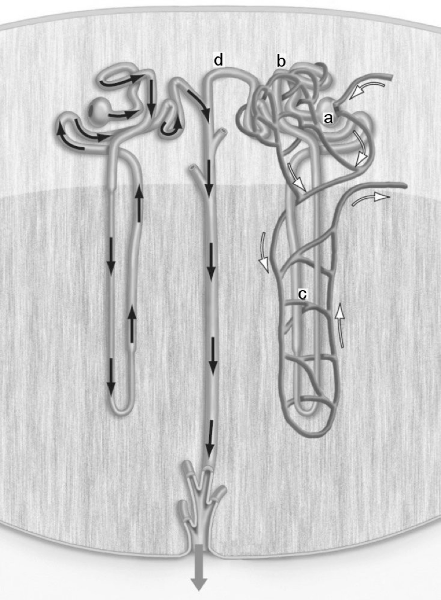 The figure above shows a nephron. Filtration takes place in the structure labeled _____.

219) The osmoregulatory/excretory system of a freshwater flatworm is based on the operation of
A) protonephridia.
B) metanephridia.
C) Malpighian tubules.
D) nephrons.