A) must include chemical senses, mechanoreception, and vision

B) includes a minimum of twelve effector neurons

C) has information flow in only one direction: away from an integrating center

3) The motor (somatic nervous) system can alter the activities of its targets, the skeletal muscle fibers, because _____.

A) it is electrically coupled by gap junctions to the muscles

B) its signals bind to receptor proteins on the muscles

C) its signals reach the muscles via the blood

4) The point of connection between two communicating neurons is called the _____.

5) In a simple synapse, neurotransmitter chemicals are released by _____.

A) the presynaptic membrane

6) In a simple synapse, neurotransmitter chemicals are received by _____.

A) the postsynaptic membrane

B) the presynaptic membrane

7) Although the membrane of a "resting" neuron is highly permeable to potassium ions, its membrane potential does not exactly match the equilibrium potential for potassium because the neuronal membrane is also _____.

A) slightly permeable to sodium ions

B) fully permeable to calcium ions

A) sodium and potassium ions into the cell

B) sodium and potassium ions out of the cell

9) In a resting potential, an example of a cation that is more abundant as a solute in the cytosol of a neuron than it is in the interstitial fluid outside the neuron is _____.

10) The membrane potential in which there is no net movement of the ion across the membrane is called the _____.

11) Two fundamental concepts about the ion channels of a "resting" neuron are that the channels _____.

A) are always open, but the concentration gradients of ions frequently change

B) are always closed, but ions move closer to the channels during excitation

C) open and close depending on stimuli, and are specific as to which ion can traverse them

D) open in response to stimuli, and then close simultaneously, in unison 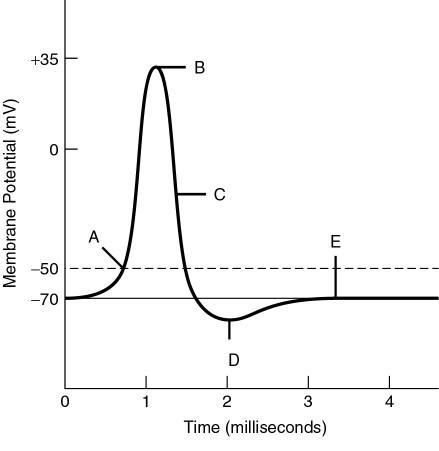 12) The membrane potential is closest to the equilibrium potential for potassium at label _____.

13) The membrane's permeability to sodium ions is at its maximum at label _____.

14) The minimum graded depolarization needed to operate the voltage-gated sodium and potassium channels is indicated by the label _____.

15) The cell is not hyperpolarized; however, repolarization is in progress, as the sodium channels are closing or closed, and many potassium channels have opened at label _____.

16) The neuronal membrane is at its resting potential at label _____.

17) If you experimentally increase the concentration of Na+ outside a cell while maintaining other ion concentrations as they were, what would happen to the cell's membrane potential?

18) The concentrations of ions are very different inside and outside a nerve cell due to _____.

19) Which of the following ions is most likely to cross the plasma membrane of a resting neuron?

21) For a neuron with an initial membrane potential at -70 mV, an increase in the movement of potassium ions out of that neuron's cytoplasm would result in the _____.

A) depolarization of the neuron

B) hyperpolarization of the neuron

22) Opening all of the sodium channels on an otherwise typical neuron, with all other ion channels closed (which is an admittedly artificial setting), should move its membrane potential to _____.

23) A graded hyperpolarization of a membrane can be induced by _____.

24) Self-propagation and refractory periods (states) are typical of _____.

A) lowest frequency of action potentials a neuron can produce

B) minimum hyperpolarization needed to prevent the occurrence of action potentials

D) peak amount of depolarization seen in an action potential

A) more slowly in axons of large than in small diameter

C) more rapidly in myelinated than in non-myelinated axons

D) by reversing the concentration gradients for sodium and potassium ions

27) A toxin that binds specifically to voltage-gated sodium channels in axons would be expected to _____.

A) prevent the hyperpolarization phase of the action potential

B) prevent the depolarization phase of the action potential

28) After the depolarization phase of an action potential, the resting potential is restored by _____.

C) a brief inhibition of the sodium-potassium pump

29) The "undershoot" phase of after-hyperpolarization is due to _____.

30) The fastest possible conduction velocity of action potentials is observed in _____.

31) Action potentials are normally carried in only one direction: from the axon hillock toward the axon terminals. If you experimentally depolarize the middle of the axon to threshold, using an electronic probe, then _____.

A) no action potential will be initiated

D) two action potentials will be initiated, one going toward the axon terminal and one going back toward the hillock

32) Why are action potentials usually conducted in one direction?

A) The nodes of Ranvier conduct potentials in one direction.

B) The brief refractory period prevents reopening of voltage-gated Na+

C) The axon hillock has a higher membrane potential than the terminals of the axon.

D) Voltage-gated channels for both Na+and K+open in only one direction.

33) If you experimentally increase the concentration of K+ inside a cell while maintaining other ion concentrations as they were, what would happen to the cell's membrane potential?

A) The membrane potential would become more negative.

B) The membrane potential would become less negative.

C) The membrane potential would remain the same.

34) Which of the following statements about action potentials is correct?

A) Action potentials for a given neuron vary in magnitude.

B) Action potentials for a given neuron vary in duration.

C) Action potentials are propagated down the length of the axon.

D) Movement of ions during the action potential occurs mostly through the sodium pump.

35) Why do Na+ ions enter the cell when voltage-gated Na+ channels are opened in neurons?

C) because the Na+concentration is much higher outside the cell than it is inside, and the Na+ions are attracted to the negatively charged interior

D) because the Na+concentration is much higher outside the cell than it is inside, and the Na+ions are actively transported by the sodium-potassium pump into the cell

36) What would probably happen if a long neuron had one continuous myelin sheath down the length of the axon with no nodes of Ranvier?

A) The action potential would be propagated nearly instantaneously to the synapse.

B) There could be no action potential generated at the axon hillock.

C) The signal would fade because it is not renewed by the opening of more sodium channels.

37) A neurophysiologist is investigating nerve reflexes in two different animals: a crab and a fish. Action potentials are found to pass more rapidly along the fish's neurons. What is the most likely explanation?

A) The fish's axons are smaller in diameter; small axons transmit action potentials faster than large axons do.

B) Unlike the crab, the fish's axons are wrapped in myelin.

C) There are more ion channels in the axons of the crab compared with fish axons.

38) Tetrodotoxin blocks voltage-gated sodium channels and ouabain blocks sodium-potassium pumps. If you added both tetrodotoxin and ouabain to a solution containing neural tissue, what responses would you expect?

A) immediate loss of resting potential

D) No effect; the substances counteract each other.

39) Which of the following will increase the speed of an action potential moving down an axon?

B) only II and III

C) only I and III

40) In multiple sclerosis the myelin sheaths around the axons of the brain and spinal cord are damaged and demyelination results. How does this disease manifest at the level of the action potential?

I) Action potentials move in the opposite direction on the axon.

III) No action potentials are transmitted.

D) only II and III

41) Neurotransmitters are released from axon terminals via _____.

42) Acetylcholine released into the junction between a motor neuron and a skeletal muscle binds to a sodium channel and opens it. This is an example of _____.

A) a voltage-gated potassium channel

B) a ligand-gated sodium channel

43) An inhibitory postsynaptic potential (IPSP) occurs in a membrane made more permeable to _____.

44) The following steps refer to various stages in transmission at a chemical synapse.

Which sequence of events is correct?

45) The activity of acetylcholine in a synapse is terminated by its_____.

A) diffusion across the presynaptic membrane

B) active transport across the postsynaptic membrane

C) diffusion across the postsynaptic membrane

D) degradation on the postsynaptic membrane

46) Ionotropic receptors found at synapses are operated via _____.

C) inhibitory, but not excitatory, synapses

D) excitatory, but not inhibitory, synapses

A) the spreading of action potentials in the heart

B) acetylcholine receptors at the neuromuscular junction

D) action potentials on the axon

48) Neurotransmitters categorized as inhibitory are expected to _____.

A) act independently of their receptor proteins

A) a temporal summation

B) a spatial summation

50) When two excitatory postsynaptic potentials (EPSPs) occur at a single synapse so rapidly in succession that the postsynaptic neuron's membrane potential has not returned to the resting potential before the second EPSP arrives, the EPSPs add together producing _____.

51) Receptors for neurotransmitters are of primary functional importance in assuring one-way synaptic transmission because they are mostly found on the _____.

I) initiating signal transduction pathways in the cells

IV) altering the permeability of the cells

53) The amino acid that operates at most inhibitory synapses in the brain is _____.

54) The botulinum toxin, which causes botulism, reduces the synaptic release of _____.

56) A chemical that affects neuronal function but is not stored in presynaptic vesicles is _____.

57) Which of the following is a direct result of depolarizing the presynaptic membrane of an axon terminal?

A) Voltage-gated calcium channels in the membrane open.

B) Synaptic vesicles fuse with the membrane.

58) How could you increase the magnitude of inhibitory postsynaptic potentials (IPSPs) generated at a synapse?

C) increase the influx of calcium

D) All of the listed responses are correct.

A) A stronger action potential results.

B) A weaker action potential results.

A) paralysis of muscle tissue

B) convulsions due to constant muscle stimulation

C) decrease in the frequency of action potentials

61) The myelin sheath plays an important role in neuron structure and function. However, when the myelin sheath is missing or not fully intact, there are consequences. There are many conditions that cause demyelination of neurons, some are autoimmune disorders, such as multiple schlerosis, and others are hereditary. The symptoms of these conditions vary, but often include speech impairment and difficulty coordinating movement. Which of the following correctly connects the symptoms of demyelination with the process of nerve impulse transmission?

A) Demyelination prevents the formation of an action potential in sensory neurons that transmit signals from the environment to the central nervous system.

C) Demyelination prevents the uptake of neurotransmitters needed to propagate a message to the next neuron.

62) What happens if a neuron is stimulated enough midway in an axon to trigger an action potential?

A) The nerve impulse would go both directions from the stimulus point, but only the axon end could transfer the message trough neurotransmitters to another neuron.

B) Since neuron transmission is one-way, the nerve impulse would only be transmitted to the end of the axon and then through neurotransmitters to the next neuron.

C) The nerve impulse could not be transmitted because it must be initiated at the dendrite end of a neuron.

D) The nerve impulse would go both directions and the dendrite end would be stimulated to send a second message through this neuron.

63) C.elegans is a model organism and was the first eukaryotic organism to have its genome sequenced. The free-living nematode is often used in laboratories investigating reproduction, particularly egg-laying. There are 16 muscles, 2 types of neurons, and multiple receptors involved in the process of laying eggs in C.elegans, and there are mutations in all of those structures for the study of the process. One particular mutation that prevents the laying of eggs by the worm is rescued by the neurotransmitter, serotonin. That rescue suggests that this mutation is most likely in which of the following?