What is the most significant failing of the celestial sphere model, as taken literally by pre-modern astronomers?

A. It fails to explain the motions of the planets

B. It fails to explain the motions of the Sun

C. It fails to explain why the constellations in the Southern Hemisphere are different

D. It fails to explain the motions of the distant stars

E. It fails to explain the phases of the Moon

A star rises in Syracuse at 10:00 PM on October 1. When will the star rise next?

Consider the star labeled “Star X” in this diagram. For what fraction of the day will this star be above the horizon?

A. Less than half

B. More than half

C. All the time; it is a circumpolar star

D. None of the time 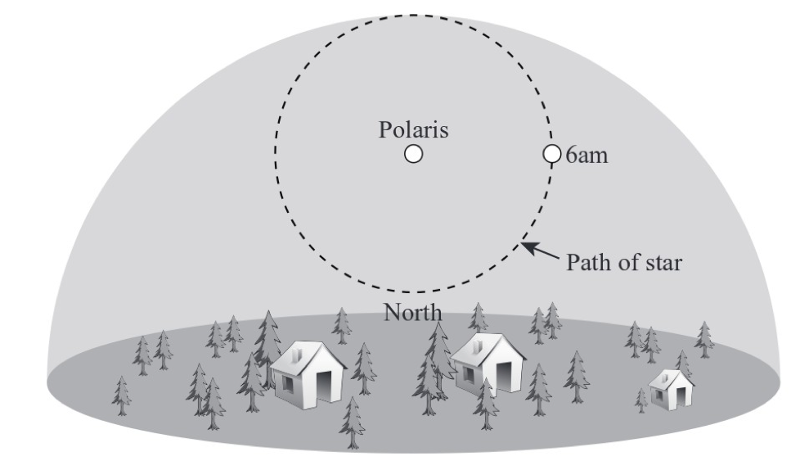 The diagram below shows the position of a star at 6AM. At what time will this star be located low in the northeastern sky? 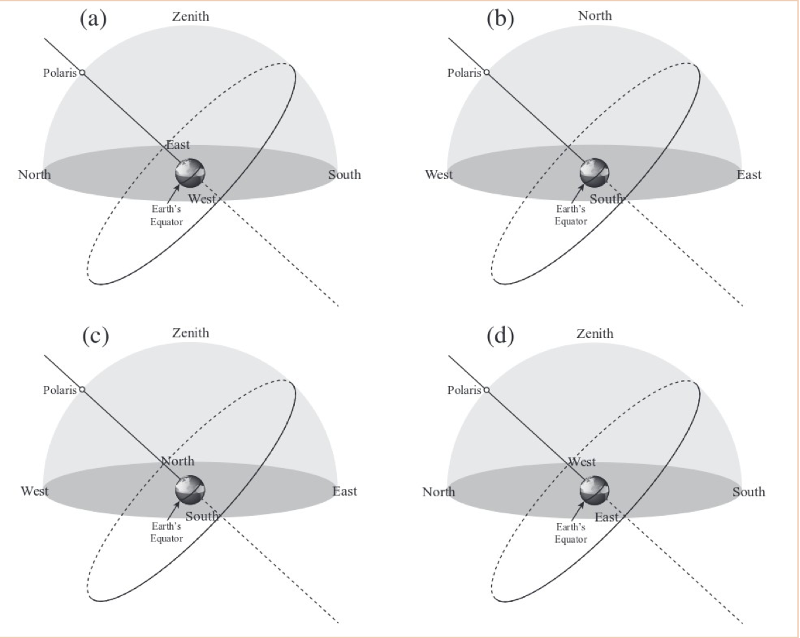 Which of the following diagrams is correctly labelled?

A “light-year” measures what?

A circumpolar star is one that is always in the sky. At which location are more of the visible stars circumpolar?

A. Quito, Ecuador (located on the equator)

The full moon sets closest to which time?

On what day will the Sun be directly overhead in Syracuse at noon?

A. On the spring equinox

B. Twice per year, during the time between the spring equinox and the summer solstice

C. On the summer solstice

D. This doesn’t happen in Syracuse, because of its latitude

E. This doesn’t happen in Syracuse, because it is always cloudy here

How many degrees does the Earth rotate around its axis in one solar day?

E. It depends on the season

Which is true on the June solstice?

A. Syracuse (latitude 24◦ N) experiences the longest days of any time during the year

B. The days and nights are of equal length in Syracuse

C. The sun is directly overhead at noon in Syracuse

D. Johannesburg, South Africa (latitude 26◦ S) experiences the longest days of any time during the year

E. The sun is directly overhead at noon on the Tropic of Capricorn (latitude 23.4◦S) 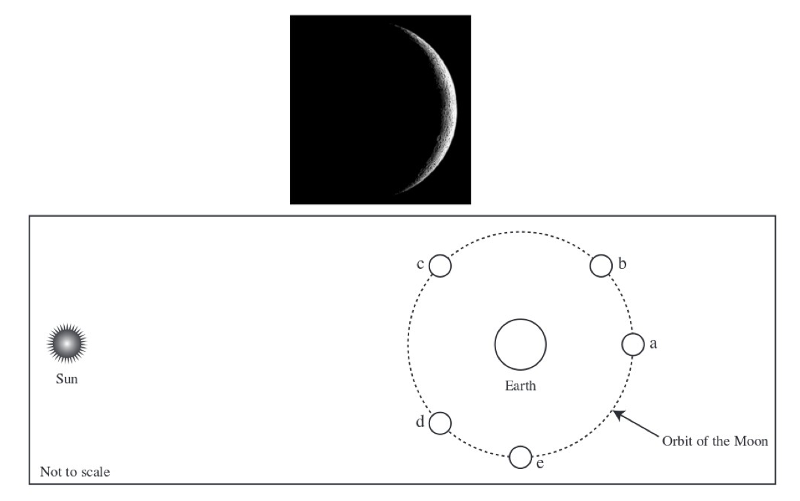 Which position of the Moon (a-e) best corresponds with the phase of the Moon shown below?

Consider the following statements regarding the reason Syracuse is warmer in the summer than ther winter:

1. Syracuse receives more direct sunlight in the summer than the

2. Syracuse receives more hours of sunlight in the summer each day than during the

3. Syracuse is closer to the Sun in the summer than in the winter.

Which of these statements are true?

During the new moon phase, how much of the Moon’s surface entire surface is sunlit?

C. Less than half, but not all of it

D. More than half, but not all of it

Where in the sky can you find the celestial poles while standing on the Equator?

A. The answer depends on the season, but not the time of day

E. The answer depends on the time of day, but not the season

A. One sidereal year

B. One sidereal day

The distance to the nearest star other than the Sun is closest to:

A. A few hundred astronomical units

B. A few astronomical units

Which of the following is true above the Arctic Circle?

A. The sun never rises on the December solstice

B. The sun will be directly overhead sometime during the summer

C. The sun never sets on the June solstice

D. More than one of the above

In the diagram shown below, which letter corresponds to a location in the Northern Hemisphere in January? 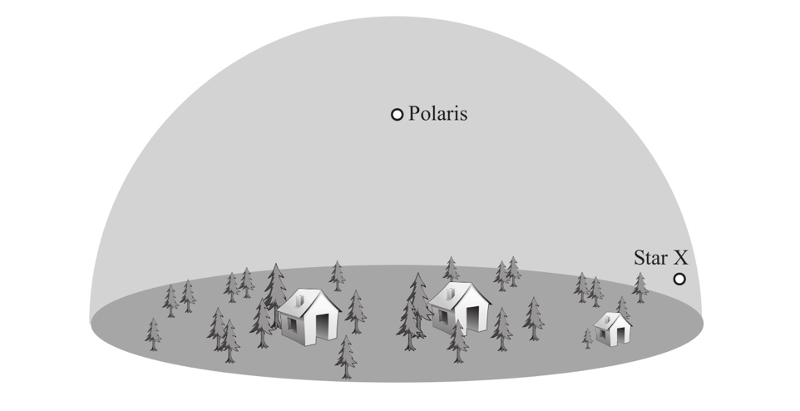 You look at the sky and see the following:

Note that the observer is looking “through” the sky at Polaris, which is on the back edge of the dome-like representation of the sky.

Where is this star located?

A. Low in the northern sky

B. Low in the eastern sky

C. Low in the western sky

D. At the zenith

E. Low in the southern sky

How much of the celestial sphere can an observer on Earth’s surface (out on the flat ocean, perhaps) see at once?

A. Less than half

C. More than half

E. It depends on your latitude

However, despite their different origins, they would agree on some things about the night sky. Which of the following would they agree on?

A. The direction that the stars appear to rotate around the pole star

B. What season it is in June

C. The constellations in the Zodiac (those that the Sun appears to pass through during the year)

D. The constellations near the pole star, useful for navigation

E. None of these

Which country experiences greater variability between the seasons?

B. Ecuador (located on the equator)

E. None of the above

A “new moon” is the phase of the lunar cycle when we can’t see the Moon at all. Which is true during a new moon?

A. None of the Moon’s surface is illuminated by the Sun

B. The Moon is below the horizon

C. The Earth’s shadow falls on top of the Moon

D. The sunlit half of the Moon is facing away from us

E. None of the above

In the time that it takes the Sun to appear to travel through all twelve constellations of the zodiac and return to its starting point, how many times does the celestial sphere appear to have rotated around the Earth?

Over the course of one day, the celestial sphere model will work reasonably well to predict the motions of which of the following?

A. The distant stars

E. All of the above 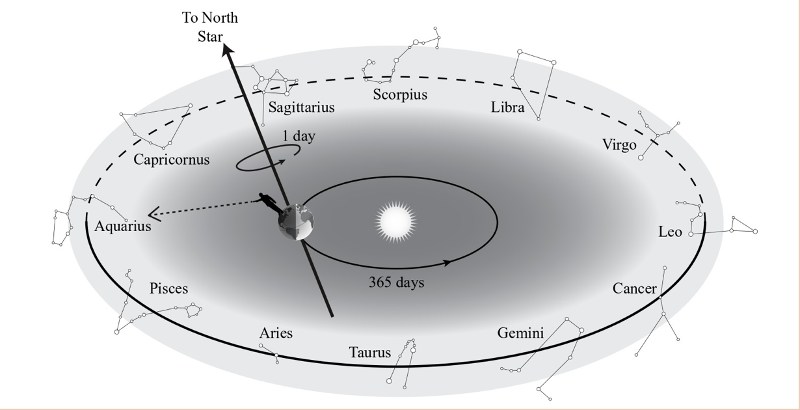 In the Earth-Sun system drawing below, the diagram indicates the direction of both the daily rotation of Earth about its own axis and its annual orbit about the Sun. Imagine you are the observer shown on Earth in the northern hemisphere. Remember that your birth sign is the zodiacal constellation highest in the sky at noon.

Suppose that a baby is born two months after the picture shown. What will her birth sign be?

E. One of the other eight constellations in the zodiac

You look up and see the Moon high in the sky; the Sun is just about to set on the western horizon. The phase of the moon is:

A. Waxing half moon (“first quarter”)

E. You can’t see the Moon while the Sun is in the sky

About how far is it from the Earth to the Moon?

How many degrees does the Earth rotate around its axis in one sidereal day?

E. It depends on the season

In Carl Sagan’s novel Contact, he envisions alien astronomers near the star Vega (about 25 light years away from Earth) detecting the first high-power radio transmissions from humans, broadcast in the 1930’s, and realizing that there was intelligent life on Earth and sending a radio transmission back.

Suppose that instead the first transmission that they received was the television footage of the Moon landing in 1969. Assume that the Vegans received that transmission as soon as the radio waves got to their star, considered what to do for an Earth year, and then broadcast a return transmission back to Earth after a year had passed.

In what year would we receive their return transmission?

A Syracusian sees the star Antares near the western horizon right after sunset. Six hours later, where can she see Antares?

A. Low in the eastern sky

B. Antares won’t be visible from Syracuse at that time, because it will be below the horizon

C. High in the southern sky

D. Directly overhead, at the zenith