1) In eukaryotic cells, chromosomes are composed of _____.

A) DNA and RNA
B) DNA only
C) DNA and proteins

2) What is the final result of mitosis in a human?

3) Starting with a fertilized egg (zygote), a series of five cell divisions would produce an early embryo with how many cells?
A) 8
B) 16

5) Scientists isolate cells in various phases of the cell cycle. They find a group of cells that have 1.5 times more DNA than G1 phase cells. The cells of this group are _____.

A) between the G1 and S phases in the cell cycle

7) The microtubule-organizing center found in animal cells is an identifiable structure present during all phases of the cell cycle. Specifically, it is known as the _____.
A) microtubulere
B) centrosome

8) In human and many other eukaryotic species' cells, the nuclear membrane has to disappear to permit _____.
A) cytokinesis
B) the attachment of microtubules to kinetochores

9) The mitotic spindle is a microtubular structure that is involved in _____.

10) Metaphase is characterized by _____.
A) aligning of chromosomes on the equator
B) splitting of the centromeres
C) cytokinesis
D) separation of sister chromatids

11) Kinetochore microtubules assist in the process of splitting centromeres by _____.

12) Some cells have several nuclei per cell. How could such multinucleated cells be explained?

D) The cell had multiple S phases before it entered mitosis.

15) At which phase are centrioles beginning to move apart in animal cells?

A) anaphase
B) prometaphase
C) metaphase

16) If there are 20 centromeres in a cell at anaphase, how many chromosomes are there in each daughter cell following cytokinesis?
A) 10
B) 20

17) Taxol is an anticancer drug extracted from the Pacific yew tree. In animal cells, Taxol disrupts microtubule formation. Surprisingly, this stops mitosis. Specifically, Taxol must affect _____.
A) the structure of the mitotic spindle
B) anaphase
C) formation of the centrioles
D) chromatid assembly

18) Which of the following are primarily responsible for cytokinesis in plant cells but not in animal cells?
A) kinetochores
B) Golgi-derived vesicles

19) Movement of the chromosomes during anaphase would be most affected by a drug that prevents _____.
A) nuclear envelope breakdown
B) elongation of microtubules

C) shortening of microtubules
D) formation of a cleavage furrow

20) Measurements of the amount of DNA per nucleus were taken on a large number of cells from a growing fungus. The measured DNA levels ranged from 3 to 6 picograms per nucleus. In which stage of the cell cycle did the nucleus contain 6 picograms of DNA?
A) G1
B) S
C) G2

21) A group of cells is assayed for DNA content immediately following mitosis and is found to have an average of 8 picograms of DNA per nucleus. How many picograms would be found at the end of S and the end of G2?

22) The beginning of anaphase is indicated by which of the following?

A) Chromatids lose their kinetochores.
B) Cohesin attaches the sister chromatids to each other.
C) Cohesin is cleaved enzymatically.

23) During which phase of mitosis do the chromatids become chromosomes?

A) telophase
B) anaphase
C) prophase

24) A cleavage furrow is _____.
A) a ring of vesicles forming a cell plate
B) the separation of divided prokaryotes
C) a groove in the plasma membrane between daughter nuclei
D) the space that is created between two chromatids during anaphase 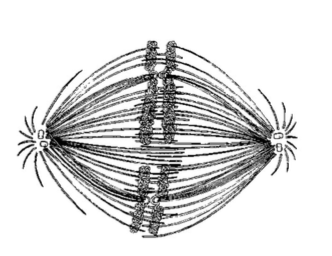 27) If the cell whose nuclear material is shown in the accompanying figure continues toward completion of mitosis, which of the following events would occur next?
A) spindle fiber formation
B) nuclear envelope breakdown

32) These protists are intermediate in what sense?
A) They reproduce by binary fission in their early stages of development and by mitosis when they are mature.
B) They use mitotic division but only have circular chromosomes.
C) They maintain a nuclear envelope during division.
D) None of them form spindles.

33) What is the most probable hypothesis about these intermediate forms of cell division?
A) They represent a form of cell reproduction, which must have evolved completely separately from those of other organisms.
B) They rely on totally different proteins for the processes they undergo.
C) They may be more closely related to plant forms that also have unusual mitosis.
D) They show some but not all of the evolutionary steps toward complete mitosis.

Nucleotides can be radiolabeled before they are incorporated into newly forming DNA and, therefore, can be assayed to track their incorporation. In a set of experiments, a student—faculty research team used labeled T nucleotides and introduced these into the culture of dividing human cells at specific times.

34) Which of the following questions might be answered by using the method described? A) How many cells are produced by the culture per hour?
B) What is the length of the S phase of the cell cycle?
C) How many picograms of DNA are made per cell cycle?

D) When do spindle fibers attach to chromosomes?

Nucleotides can be radiolabeled before they are incorporated into newly forming DNA and, therefore, can be assayed to track their incorporation. In a set of experiments, a student—faculty research team used labeled T nucleotides and introduced these into the culture of dividing human cells at specific times.

D) a plant cell in metaphase

37) Which of the following does NOT occur during mitosis?

D) separation of the spindle poles

38) The drug cytochalasin B blocks the function of actin. Which of the following aspects of the cell cycle would be most disrupted by cytochalasin B?
A) spindle formation
B) spindle attachment to kinetochores

39) Motor proteins require which of the following to function in the movement of chromosomes toward the poles of the mitotic spindle?
A) intact centromeres
B) a microtubule-organizing center

C) ATP as an energy source
D) synthesis of cohesin

41) Neurons and some other specialized cells divide infrequently because they _____.

A) no longer have active nuclei
B) have entered into G0

D) cyclin and a cyclin-dependent kinase

43) Cyclin-dependent kinase (Cdk) is _____.
A) inactive, or "turned off," in the presence of cyclin
B) present only during the S phase of the cell cycle
C) the enzyme that catalyzes the attachment of chromosomes to microtubules

D) an enzyme that attaches phosphate groups to other proteins

44) What happens if MPF (mitosis-promoting factor) is introduced into immature frog oocytes that are arrested in G2?

A) Nothing happens.
B) The cells undergo meiosis.
C) The cells enter mitosis.
D) Cell differentiation is triggered.

45) Once a cell completes mitosis, molecular division triggers must be turned off. What happens to MPF during mitosis?
A) It is completely degraded.
B) It is exported from the cell.

46) The M-phase checkpoint ensures that all chromosomes are attached to the mitotic spindle. If this does not happen, cells would most likely be arrested in _____.
A) telophase
B) prophase

47) Which of the following is released by platelets in the vicinity of an injury?

48) Which of the following is a protein synthesized at specific times during the cell cycle that associates with a kinase to form a catalytically active complex?
A) PDGF
B) MPF

49) Which of the following is a protein maintained at steady levels throughout the cell cycle that requires cyclin to become catalytically active?
A) PDGF
B) MPF

50) Which of the following triggers the cell's passage past the G2 checkpoint into mitosis? A) PDGF

51) The cyclin component of MPF is destroyed toward the end of which phase?

54) Besides the ability of some cancer cells to overproliferate, what else could logically result in a tumor?
A) changes in the order of cell cycle stages
B) lack of appropriate cell death

55) Anchorage dependence of animal cells in vitro or in vivo depends on which of the following?

56) A research team began a study of a cultured cell line. Their preliminary observations showed them that the cell line did not exhibit either density-dependent inhibition or anchorage dependence. What could they conclude right away?
A) The cells are unable to form spindle microtubules.

B) They have altered the series of cell cycle phases.
C) The cells show characteristics of tumors.
D) They were originally derived from an elderly organism.

57) For a chemotherapeutic drug to be useful for treating cancer cells, which of the following is most desirable?
A) It is safe enough to limit all apoptosis.
B) It does not alter metabolically active cells.

B) Cancer cells are no longer anchorage-dependent.
C) Cell cycle checkpoints are not in place to stop cells with chromosome abnormalities.

60) Density-dependent inhibition is a phenomenon in which crowded cells stop dividing at some optimal density and location. This phenomenon involves binding of a cell-surface protein to its counterpart on an adjoining cell's surface. A growth inhibiting signal is sent to both cells, preventing them from dividing. Certain external physical factors can affect this inhibition mechanism.

Select the statement that makes a correct prediction about natural phenomena that could occur during the cell cycle to prevent cell growth.
A) As cells become more numerous, they begin to squeeze against each other, restricting their size and ability to allow cell growth.

D) As cells become more numerous, more and more of them enter the synthesis part of the cell cycle and duplicate DNA to inhibit cell growth.