If the half-life of carbon-14 is about 5,730 years, then a fossil that has 1/16th the normal proportion of carbon-14 to carbon-12 should be about how many years old?

What is true of the fossil record of mammalian origins?

The first terrestrial organisms probably were considered which of the following?

The evolution of mammals from early tetrapods

Which of these planet substances is the richest source of fossils?

Radiometric dating is based on the

Which event stimulated the rapid development of eukaryotes?

For purposes of differentiation, what is the unique feature of the jaw fossils of nonmammalian tetrapods?

Which group of tetrapods had the first examples of specialized teeth?

Which effect of continental drift would allow scientists to track the history of life on the planet?

Which of the following is a biological cause of extinctions?

A difficulty in presenting evidence for a sixth mass extinction is

Hox genes are a group of related genes

An organism has a relatively large number of Hox genes in its genome. Which of the following is true of this organism?

Bagworm moth caterpillars feed on evergreens and carry a silken case or bag around with them in which they eventually pupate. Adult female bagworm moths are larval in appearance; they lack the wings and other structures of the adult male and instead retain the appearance of a caterpillar even though they are sexually mature and can lay eggs within the bag. This is a good example of

Larval flies (maggots) express the Ubx gene in all of their segments and thereby lack appendages. If this same gene continued to be expressed throughout subsequent developmental stages, except in the head region, and if the result was a fit, sexually mature organism that still strongly resembled a maggot, this would be an example of

One explanation for the evolution of insect wings suggests that wings began as lateral extensions of the body that were used as heat dissipaters for thermoregulation. When they had become sufficiently large, these extensions became useful for gliding through the air, and selection later refined them as flight-producing wings. If this hypothesis is correct, modern insect wings could best be described as

Many species of snakes lay eggs. However, in the forests of northern Minnesota where growing seasons are short, only live-bearing snake species are present. This trend toward species that perform live birth in a particular environment is an example of

In the 5 to 7 million years that the hominid lineage has been diverging from its common ancestor with the great apes, dozens of hominid species have arisen, often with several species coexisting in time and space. As recently as 30,000 years ago, Homo sapiens coexisted with Homo neanderthalensis. Both species had large brains and advanced intellects. The fact that these traits were common to both species is most easily explained by which of the following?

The existence of evolutionary trends, such as increasing body sizes among horse species, is evidence that

If a particular marine organism is fossilized in the sediments immediately overlying the igneous rock at the arrow labeled II, at which other location(s), labeled A-E, would a search be most likely to find more fossils of this organism?

Assuming that the rate of seafloor spreading was constant during the 1-million-year period depicted in Figure 23.1, what should be the approximate age of marine fossils found in undisturbed sedimentary rock immediately overlying the igneous rock at the arrow labeled II? 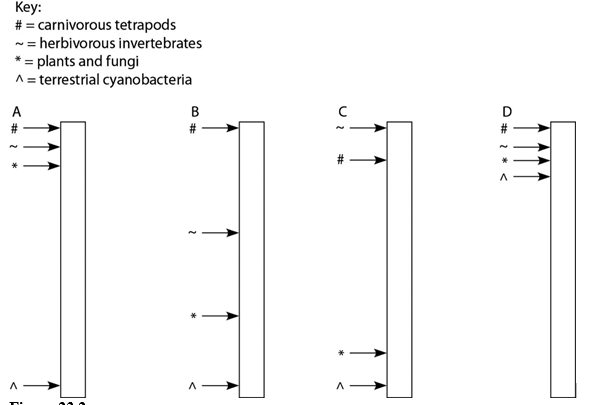 A sediment core is removed from the floor of an inland sea. The sea has been in existence, off and on, throughout the entire time that terrestrial life has existed. Researchers wish to locate and study the terrestrial organisms fossilized in this core. The core is illustrated in Figure 23.2 as a vertical column, with the top of the column representing the most recent strata and the bottom representing the time when land was first colonized by life. Assuming the existence of fossilized markers for each of the following chemicals, what is the sequence in which they should be found in this sediment core, working from ancient sediments to recent sediments? 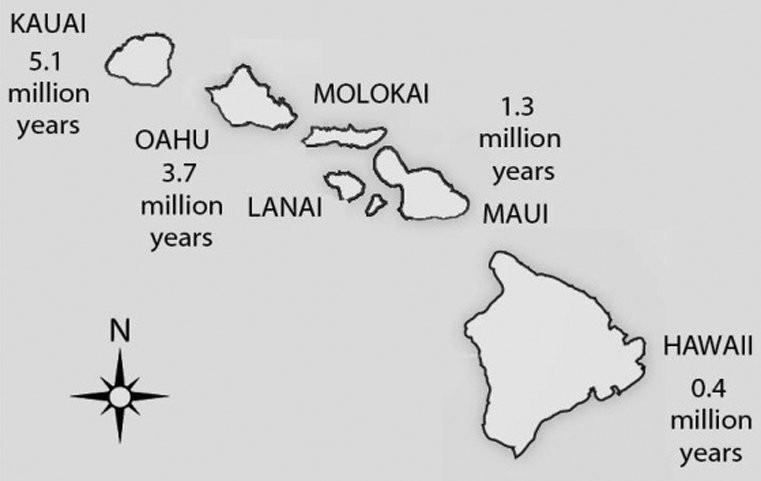 Hawaii is the most southeastern of the seven islands and is also closest to the seafloor spreading center from which the Pacific plate originates, which lies about 5,600 km farther to the southeast. Assuming equal sedimentation rates, what should be the location of the thickest sediment layer and, thus, the area with the greatest diversity of fossils above the oceanic crust?

According to the theory of seafloor spreading, oceanic islands, such as the Hawaiian Islands depicted in Figure 23.3, form as oceanic crustal plates move over a stationary "hot spot" in the mantle. Currently, the big island of Hawaii is thought to be over a hot spot, which is why it is the only one of the seven islands that has active volcanoes. What should be true of the island of Hawaii?

Upon being formed, oceanic islands, such as the Hawaiian Islands, should feature what characteristic, leading to which phenomenon? 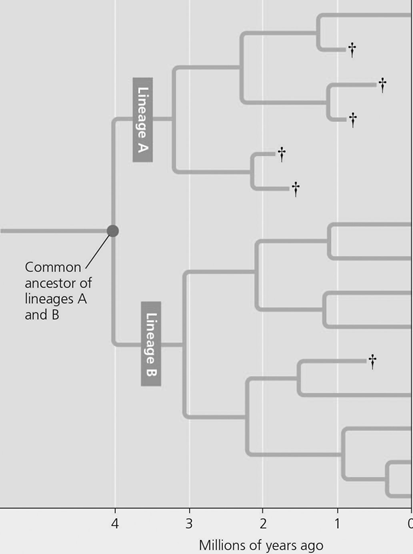 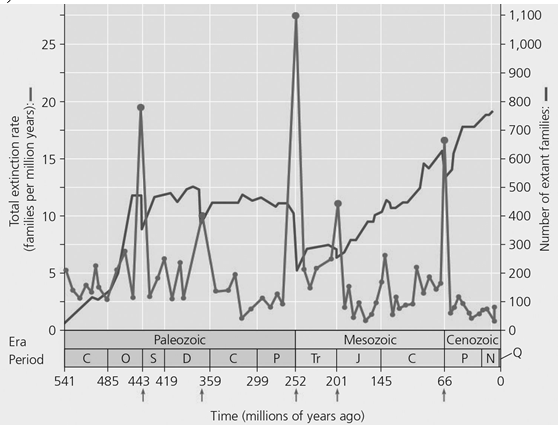 Which period had the greatest rate of extinction?

A female fly, full of fertilized eggs, is swept by high winds to an island far out to sea. She is the first fly to arrive on this island and the only fly to arrive in this way. Thousands of years later, her numerous offspring occupy the island, but none of them resembles her. There are, instead, several species, each of which eats only a certain type of food. None of the species can fly, for their flight wings are absent, and their balancing organs (in other words, halteres) are now used in courtship displays. The male members of each species bear modified halteres that are unique in appearance to their species. Females bear vestigial halteres. The ranges of all of the daughter species overlap.

If these fly species lost the ability to fly independently of each other as a result of separate mutation events in each lineage, then the flightless condition in these species could be an example of

A female fly, full of fertilized eggs, is swept by high winds to an island far out to sea. She is the first fly to arrive on this island and the only fly to arrive in this way. Thousands of years later, her numerous offspring occupy the island, but none of them resembles her. There are, instead, several species, each of which eats only a certain type of food. None of the species can fly, for their flight wings are absent, and their balancing organs (in other words, halteres) are now used in courtship displays. The male members of each species bear modified halteres that are unique in appearance to their species. Females bear vestigial halteres. The ranges of all of the daughter species overlap.

Which of these fly organs, as they exist in current fly populations, best fits the description of an exaptation?

All animals with eyes or eyespots that have been studied so far share a gene in common. When mutated, the gene Pax-6 causes lack of eyes in fruit flies, tiny eyes in mice, and missing irises (and other eye parts) in humans. The sequence of Pax-6 in humans and mice is identical. There are so few sequence differences with fruit fly Pax-6 that the human/mouse version can cause eye formation in eyeless fruit flies, even though vertebrates and invertebrates last shared a common ancestor more than 500 million years ago.

Fruit fly eyes are of the compound type, which is structurally very different from the camera-type eyes of mammals. Even the camera-type eyes of molluscs, such as octopi, are structurally quite different from those of mammals. Yet, fruit flies, octopi, and mammals possess very similar versions of Pax-6. The fact that the same gene helps produce very different types of eyes is most likely due to

Pax-6 usually causes the production of a type of light-receptor pigment. In vertebrate eyes, though, a different gene (the rh gene family) is responsible for the light-receptor pigments of the retina. The rh gene, like Pax-6, is ancient. In the marine ragworm, for example, the rh gene causes production of c-opsin, which helps regulate the worm's biological clock. Which of these most likely accounts for vertebrate vision?

The appearance of Pax-6 in all animals with eyes can be explained in multiple ways. Based on the information given, which explanation is most likely?

An improved method of radiometric dating, which filtered out contaminants, showed that most Neanderthal bones in Europe are older than suggested by earlier dating. This new dating suggests that Neanderthals' time on the planet did not overlap with modern humans. Radiocarbon dating depends on measuring the radioactive isotopes of carbon-14.

Which of the following statements supports the null hypothesis that modern humans and Neanderthals did not occupy the same sites at the same time?

Scientists, looking at the range of beak shapes and sizes across different finch species, observed that the thicker beak expressed a gene known as BMP4 early in development. To verify that the BMP4 gene itself could trigger the growth of bigger beaks, researchers increased the production of BMP4 in the developing beaks of chicken embryos. Which of the following results would explain why BMP4-treated chicks began growing wider, taller beaks?

Which factor most likely caused animals and plants in India to differ greatly from species in nearby Southeast Asia?

Adaptive radiations can be a direct consequence of four of the following five factors. Select the exception.

A researcher discovers a fossil of what appears to be one of the oldest-known multicellular organisms. The researcher could estimate the age of this fossil based on

A genetic change that caused a certain Hox gene to be expressed along the tip of a vertebrate limb bud instead of farther back helped make possible the evolution of the tetrapod limb. This type of change is illustrative of

A swim bladder is a gas-filled sac that helps fish maintain buoyancy. The evolution of the swim bladder from the air-breathing organ (a simple lung) of an ancestral fish is an example of