Learn about BINGO on Easy Notecards

BINGO on Easy Notecards uses data from notecard sets to create the BINGO Cards and Calls. BINGO can be played with any notecard set that has at least 10 notecards. Challenge your classmates in the Multiplayer version or play against computer opponents in Single Player. After the game is over you will be shown the winner(s) along with the items you got correct, incorrect and missed.

In addition to the Quiz and Matching Game, BINGO on Easy Notecards is a great way to learn new material while having fun. 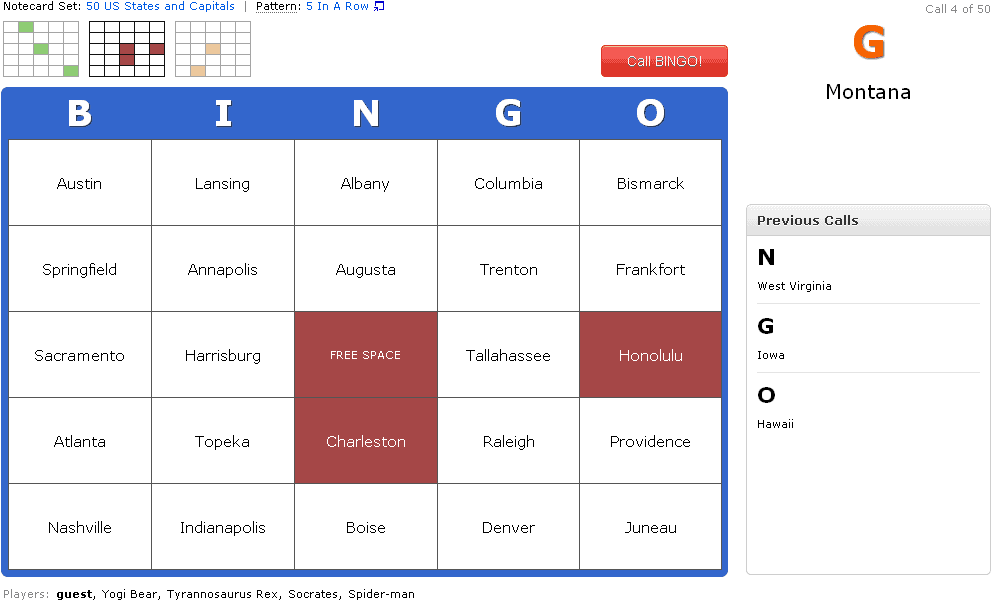 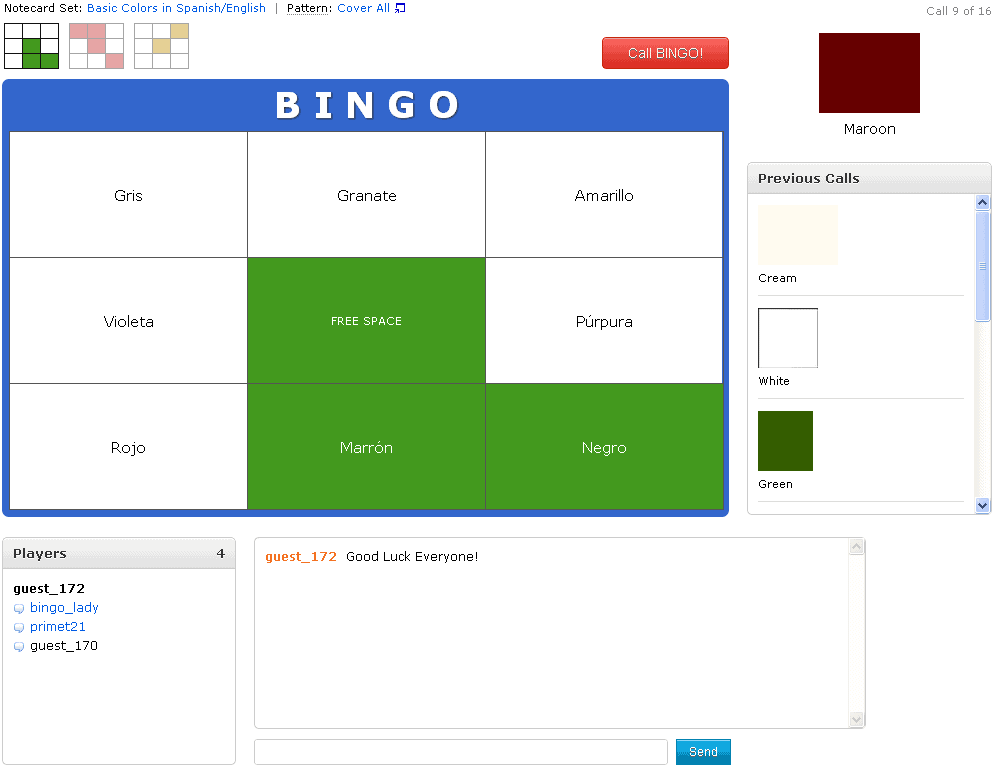 Below is a screenshot and description of the different parts of the BINGO Play Area for both Multiplayer and Single Player . Keep in mind if you are playing with a notecard set that has less than 30 notecards you will use the 3 X 3 BINGO Card instead of the 5 X 5 BINGO Card pictured. 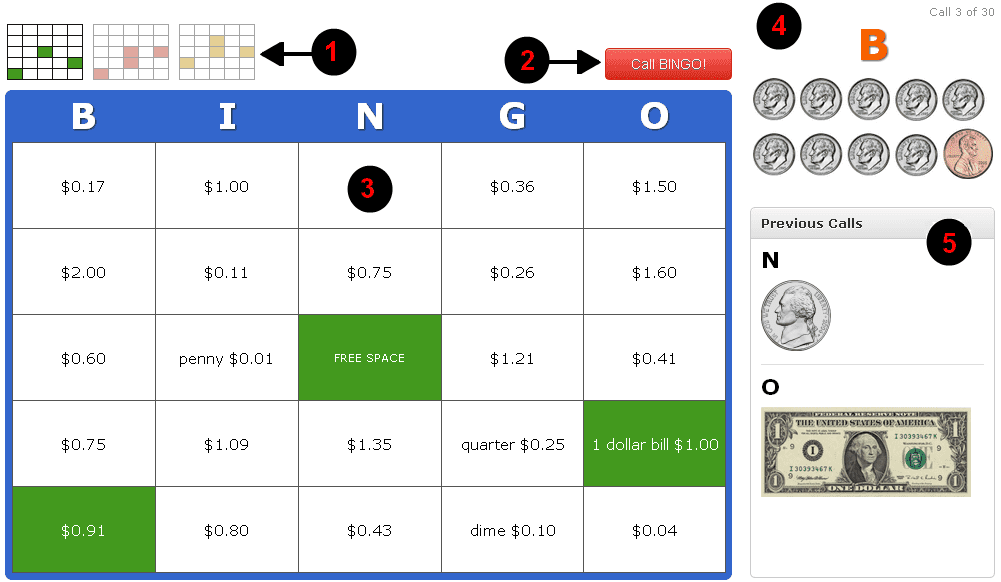 BINGO is an easy game to play. Here's how a typical game works:

Note 1: If you make 3 invalid BINGO calls your game will be over. In Multiplayer, you will be able to play in the next game.
Note 2: If there is more than 1 item that matches a Call, only 1 item should be selected. It doesn't matter which one. For example, if the Call is "5 + 4" and there is more than one "9" on your BINGO Card only select one.

The 2 Game Types are: 5 In A Row and Cover All. Look below for a description of each game type.

The 5 In A Row Game Type is used when there are 30 or more notecards available. Calls will include a "B", "I", "N", "G" or "O". For example, if you are playing BINGO for State Capitals and the Call is "B-Texas", look for "Austin" under the "B" letter on your BINGO Card.

A valid BINGO is when 5 items in a row are correctly selected to form a horizontal, vertical or diagonal line.

The Cover All Game Type is used when there are less than 30 notecards available. Calls will not include a letter. For exampleif you are playing BINGO for Solar System and the Call is "closest to the sun", look for "mercury" anywhere on your BINGO Card.

A valid BINGO is when all 9 items are correctly selected.

Below is a screenshot of the Game Results of a Multiplayer game. The Single Player Game Results looks the same except there are no BINGO Points awarded.

Did you notice the "Your Stats" section in the screenshot above? It displays the number of items you selected correctly, incorrectly and the ones you missed in the previous game. Here's a quick explanation of each stat:

To view a detailed listing of the items for a particular stat click the number located to the right of it. Here's an example screenshot of Incorrect Selections: 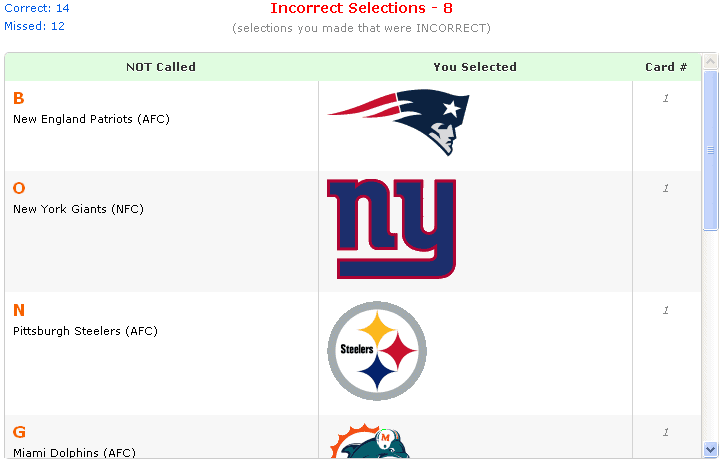 With Multiplayer you can play BINGO against your friends.

Join or Create a BINGO Room

To join an existing BINGO Room click the "Bingo Rooms" tab at the top (view BINGO Rooms) and click the green "Join" button for the room you want to join.

There is a 45 second intermission between games. However, if more than half of the players are ready, a player is ready when he/she clicks the "Ready" button, the intermission will be shortened to 5 seconds.

The intermission clock will not start until there are at least 2 players in the room.

Each BINGO Room has a player list and chat area at the bottom of the page (see screenshot below). To post a message simply type your message and click the "Send" button.

Here are the steps to start a Single Player BINGO game: