7) Sexual reproduction
A) allows animals to conserve resources and reproduce only during optimal conditions.
B) can produce diverse phenotypes that may enhance survival of a population in a changing environment.
C) yields more numerous offspring more rapidly than is possible with asexual reproduction.
D) enables males and females to remain isolated from each other while rapidly colonizing habitats.
E) guarantees that both parents will provide care for each offspring.

9) For water fleas of the genus Daphnia, switching from a pattern of asexual reproduction to sexual reproduction coincides with
A) environmental conditions becoming more favorable for offspring.
B) greater abundance of food resources for offspring.
C) periods of temperature or food stresses on adults.
D) completion of puberty.
E) exhaustion of an individual's supply of eggs.

10) All individuals of a particular species of whiptail lizards are females. Their reproductive efforts depend on
A) fertilization of their eggs by males of other lizard species.
B) gonadal structures that only undergo mitosis.
C) meiosis followed by a doubling of the chromosomes in eggs.
D) budding prior to the development of a sexual phenotype.
E) fragmentation via autolysis.

11) Evidence that parthenogenic whiptail lizards are derived from sexually reproducing ancestors includes
A) the requirement for male-like behaviors in some females before their partners will ovulate.
B) the development and then regression of testes prior to sexual maturation.
C) the observation that all of the offspring are haploid.
D) dependence on favorable weather conditions for ovulation to occur.
E) the persistence of a vestigial penis among some of the females.

12) Like many other fishes, bluehead wrasses utilize harem mating as they reproduce sexually. However, unlike most fishes,
A) they are simultaneous hermaphrodites.
B) they function without any signaling by steroid hormones.
C) they undergo a prolonged diapause during low tide.
D) their offspring can be either haploid or diploid.
E) large females morph into reproductively competent males.

13) Which of the following patterns of reproduction are found only among invertebrate animals?
A) sexual and asexual reproduction
B) external and internal fertilization
C) hermaphroditism and parthenogenesis
D) pheromonal and hormonal coordination
E) fission and budding

14) Animals with reproduction dependent on internal fertilization need not have
A) any copulatory organs.
B) a receptacle that receives sperm.
C) behavioral interaction between males and females.
D) internal development of embryos.
E) haploid gametes.

17) Organisms with a reproductive pattern that produces shelled amniotic eggs generally
A) end up having a higher embryo mortality rate than do organisms with unprotected embryos.
B) invest most of their reproductive energy in the embryonic and early postnatal development of their offspring.
C) invest more energy in parenting than do placental animals.
D) produce more gametes than do those animals with external fertilization and development.
E) lower their embryo mortality rate to less than one in a thousand.

18) Among nonmammalian vertebrates, the cloaca is an anatomical structure that functions as
A) a specialized sperm-transfer device produced only by males.
B) a shared pathway for the digestive, excretory, and reproductive systems.
C) a region bordered by the labia minora and clitoris in females.
D) a source of nutrients for developing sperm in the testes.
E) a gland that secretes mucus to lubricate the vaginal opening.

20) Females of many insect species, including honeybee queens, can store gametes shed by their mating partners in
A) their nests.
B) the abdominal tract.
C) the cloaca.
D) the uterus.
E) the spermatheca.

24) The junction of the upper vagina and the uterus is called the
A) fallopian tube.
B) clitoris.
C) oviduct.
D) labia majora.
E) cervix.

25) In humans, the follicular cells that remain behind in the ovary following ovulation become
A) the ovarian endometrium that is shed at the time of the menses.
B) a steroid-hormone synthesizing structure called the corpus luteum.
C) the thickened portion of the uterine wall.
D) swept into the fallopian tube.
E) the placenta, which secretes cervical mucus.

26) Among mammals, the male and female genital structures that consist mostly of erectile tissue include the
A) penis and clitoris.
B) vas deferens and oviduct.
C) testes and ovaries.
D) seminiferous tubules and hymen.
E) prostate and ovaries.

38) Mature human sperm and ova are similar in that
A) they both have the same number of chromosomes.
B) they are approximately the same size.
C) they each have a flagellum that provides motility.
D) they are produced from puberty until death.
E) they are formed before birth.

39) A male's "primary" sex characteristics include
A) deepening of the voice at puberty.
B) embryonic differentiation of the seminal vesicles.
C) growth of skeletal muscle.
D) elongation of the skeleton prior to puberty.
E) onset of growth of facial hair at puberty.

41) At the end of a nonpregnant ovarian cycle, the breakdown and discharge of the soft uterine tissues is called
A) menstruation.
B) lactation.
C) fertilization.
D) menopause.
E) ovulation.

44) A contraceptive pill that continuously inhibits the release of GnRH from the hypothalamus will
A) increase the production of estrogen and progesterone by the ovaries.
B) initiate ovulation.
C) reduce the secretion of gonadotropins from the anterior pituitary gland.
D) stimulate the secretion of LH and FSH from the posterior pituitary gland.
E) increase the flow phase of the menstrual cycle.

45) A function-disrupting mutation in the progesterone receptor gene would likely result in
A) the absence of secondary sex characteristics.
B) the absence of pituitary gonadotropin hormones.
C) the inability of the uterus to support pregnancy.
D) enlarged and hyperactive uterine endometrium.
E) the absence of mammary gland development.

46) A primary response by the Leydig cells in the testes to the presence of luteinizing hormone is an increase in the synthesis and secretion of
A) inhibin.
B) testosterone.
C) oxytocin.
D) prolactin.
E) progesterone.

47) A reproductive hormone that is secreted directly from a structure in the brain is
A) testosterone.
B) estradiol.
C) progesterone.
D) follicle-stimulating hormone.
E) gonadotropin-releasing hormone.

48) The primary function of the corpus luteum is to
A) nourish and protect the egg cell.
B) produce prolactin in the alveoli.
C) maintain progesterone and estrogen synthesis after ovulation has occurred.
D) stimulate the development of the mammary glands.
E) support pregnancy in the second and third trimesters.

49) For the 10 days following ovulation in a nonpregnant menstrual cycle, the main source of progesterone is the
A) adrenal cortex.
B) anterior pituitary.
C) corpus luteum.
D) developing follicle.
E) placenta.

50) Ovulation is the follicular response to a burst of secretion of
A) LH.
B) progesterone.
C) inhibin.
D) prolactin.
E) estradiol.

51) Prior to ovulation, the primary steroid hormone secreted by the growing follicle is
A) LH.
B) FSH.
C) inhibin.
D) GnRH.
E) estradiol.

52) The hypothalamic hormone that stimulates hormone secretion by the anterior pituitary gland is
A) LH.
B) FSH.
C) inhibin.
D) GnRH.
E) estradiol.

55) For normal human fertilization to occur,
A) many ova must be released.
B) the uterus must be enlarged.
C) only one sperm need penetrate one egg.
D) secretion of pituitary FSH and LH must decrease.
E) the secondary oocyte must implant in the uterus.

57) What is the embryo-produced hormone that maintains progesterone and estrogen secretion by the corpus luteum through the first trimester of pregnancy?
A) luteinizing hormone (LH)
B) follicle-stimulating hormone (FSH)
C) progesterone
D) human chorionic gonadotropin (HCG)
E) gonadotropin-releasing hormone (GnRH)

59) Labor contractions can be increased by the medical use of a synthetic drug that mimics the action of
A) inhibin.
B) luteinizing hormone.
C) oxytocin.
D) prolactin.
E) vasopressin.

60) A high rate of metabolic activity is maintained in the pregnant uterus by
A) inhibin.
B) testosterone.
C) oxytocin.
D) prolactin.
E) progesterone.

61) The secretion of follicle-stimulating hormone from the anterior pituitary gland is reduced by
A) inhibin.
B) luteinizing hormone.
C) oxytocin.
D) prolactin.
E) vasopressin.

62) The drug RU-486 functions by
A) inhibiting release of gonadotropins from the pituitary.
B) blocking progesterone receptors in the uterus.
C) preventing release of the secondary oocyte from the ovary.
D) reducing sexual interest.
E) prolonging the endurance of the corpus luteum.

63) Human fertility drugs taken by women increase the chance of multiple births, probably because they
A) enhance implantation opportunities.
B) stimulate the development of many ovarian follicles.
C) mimic progesterone action in the uterus.
D) stimulate steroidogenesis.
E) delay parturition.

64) The thin layer of the developing embryo which secretes a hormone that keeps the corpus luteum functioning is the
A) cervix.
B) endometrium.
C) amnion.
D) plasma membrane.
E) chorion.

65) In excreted urine, a reliable "marker" that a pregnancy has initiated is
A) progesterone.
B) estrogen.
C) follicle-stimulating hormone.
D) chorionic gonadotropin.
E) hypothalamic-releasing hormones.

68) The use of birth control pills (oral contraceptives)
A) reduces the incidence of ovulation.
B) prevents fertilization by keeping the sperm and egg physically separated by a mechanical barrier.
C) prevents implantation of an embryo.
D) prevents sperm from exiting the male urethra.
E) prevents oocytes from entering the uterus.

71) A vasectomy
A) eliminates spermatogenesis.
B) eliminates testosterone synthesis.
C) prevents implantation of an embryo.
D) prevents sperm from exiting the male urethra.
E) prevents oocytes from entering the uterus.

73) For lactation to take place, the synthesis of breast milk and its release from the mammary gland, respectively, are caused by
A) testosterone and dihydrotestosterone.
B) estrogen and progesterone.
C) cortisol and testosterone.
D) prolactin and oxytocin.
E) luteinizing hormone and follicle-stimulating hormone.

74) So-called "combination" birth control pills function in contraception by
A) inhibiting the release of GnRH, FSH, and LH.
B) irritating the uterine lining so as to prevent implantation.
C) causing spontaneous abortions.
D) blocking progesterone receptors, so that pregnancy cannot be maintained.
E) binding to and inactivating any sperm that enter the oviduct. 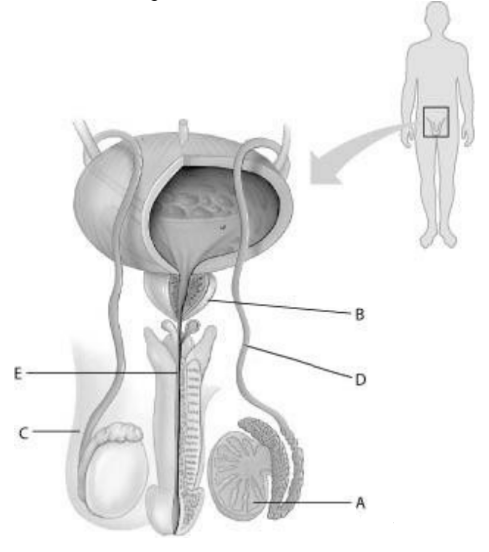 85) You observe vertebrate organisms with parthenogenetic reproduction, internal development of embryos, and the lack of parental care for its young. Based on this information, you should categorize these organisms as
A) earthworms.
B) lizards.
C) birds.
D) frogs.
E) mammals.

86) Imagine that a woman is in the final week of her pregnancy. Her doctor gives her an injection of oxytocin. The likely result of this is that the pregnant woman would
A) undergo the loss of oxytocin receptors from her uterine smooth muscle cells.
B) stop secreting prostaglandins from the placenta.
C) undergo vigorous contractions of her uterine muscles.
D) increase the synthesis and secretion of progesterone.
E) be prevented from lactation.

87) Which of the following characterizes parthenogenesis?
A) An individual may change its sex during its lifetime.
B) Specialized groups of cells grow into new individuals.
C) An organism is first a male and then a female.
D) An egg develops without being fertilized.
E) Both mates have male and female reproductive organs.

88) In male mammals, excretory and reproductive systems share
A) the testes.
B) the urethra.
C) the seminal vesicle.
D) the vas deferens.
E) the prostate.

91) During human gestation, rudiments of all organs develop
A) in the first trimester.
B) in the second trimester.
C) in the third trimester.
D) while the embryo is in the oviduct.
E) during the blastocyst stage.

94) Which statement about human reproduction is false?
A) Fertilization occurs in the oviduct.
B) Effective hormonal contraceptives are currently available only for females.
C) An oocyte completes meiosis after a sperm penetrates it.
D) The earliest stages of spermatogenesis occur closest to the lumen of the seminiferous tubules.
E) Spermatogenesis and oogenesis require different temperatures.