One organism benefits, and is harmed

Are ones that are new or changing, showing an increase in incidence in the recent past, or potential to increase in the near future.

What is an emerging disease?

1)New strains, such as E. coli and influenza

4) Global warming and changes in weather patterns may increase the distribution and survival if reservoirs and vectors resulting in the introduction and dissemination of diseases such as malaria and hantavirus pulmonary syndrome.

7)incidence of a disease. The increase in Lyme disease

number of cases at a particular time

Number of people contracting the disease

Always present but not enough to be public health concern

The spread of infection

4) some pathogenic micros grow in no living reservoirs, such as soil & water

The need of bacteria to cause disease

Which of the following disease is not correctly matched to it's reservoir?

Correctly matched to it's reservoir

Be Familiar with concept of portals of entry

* Some can gain access to tissue by inoculation through the skin and mucous membranes in bites, injections, and other wounds. This route of penetration is called parenteral route.

* Adhesions can be glycoproteins or lipoproteins and are frequently associated with fimbriae.

* Mannose is the most common receptor

How can Microbes penetrate into host cytoskeleton 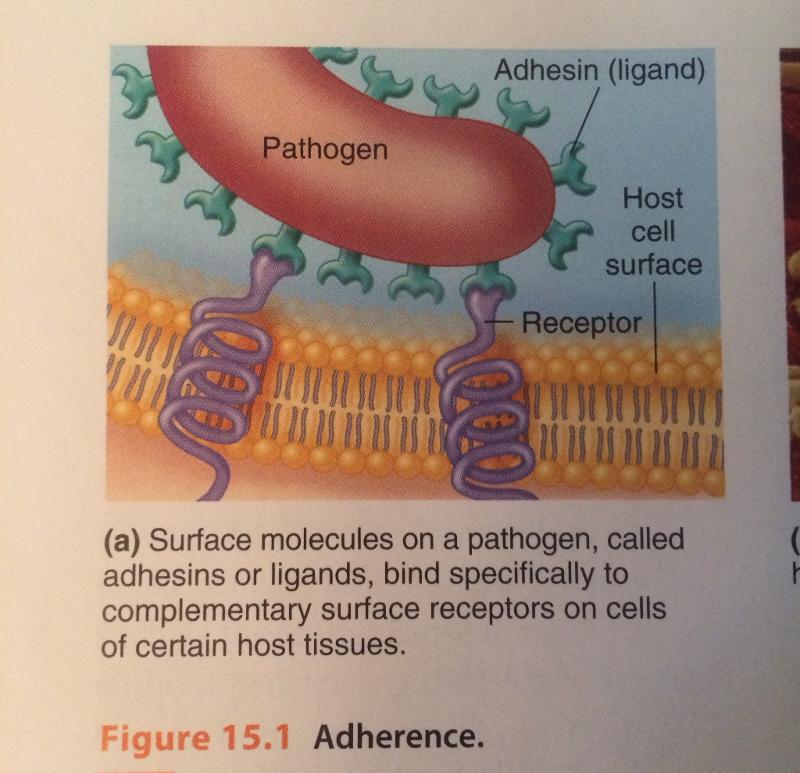 Know the various classes of enzymes microbes can produce to spread and evade host defenses:

Coagulases- are bacterial enzymes that coagulate (clot) the fibrinogen in blood. Example: Coagulases are produced by some members of the genus staphylococcus; they may be involved in the walking-off process in boils produced by staph.

Kinases- are bacterial enzymes that break down fibrin and thus digest clots formed by the body to isolate the infection. Example: One of the better-known kinases is fibrinolysin (strepokinase) which is produced by such streptococci as Streptococcus pyogenes.

Hyaluronidase- enzyme which destroys a mucopolysaccharide that holds cell together Example: secreted by certain bacteria such as streptococci

How do some microbes evade phagocytosis?

Phagocytes are not always successful; sometimes there are adherence problems, as with bacteria that comes with slimy capsules. Example: Strep pneumonia, and some organisms like TB can live inside the macrophage, resistant to its lysosome enzymes, unless the macrophages is further strengthened by chemicals released by T cells.

* However, the human body can produce antibodies against the capsule, and when these antibodies are present on the capsule surface, the encapsulated bacteria are easily destroyed by phagocytosis.

Be able to characterize, compare and contrast exotoxtins and endotoxins. Table 15.3 is useful. 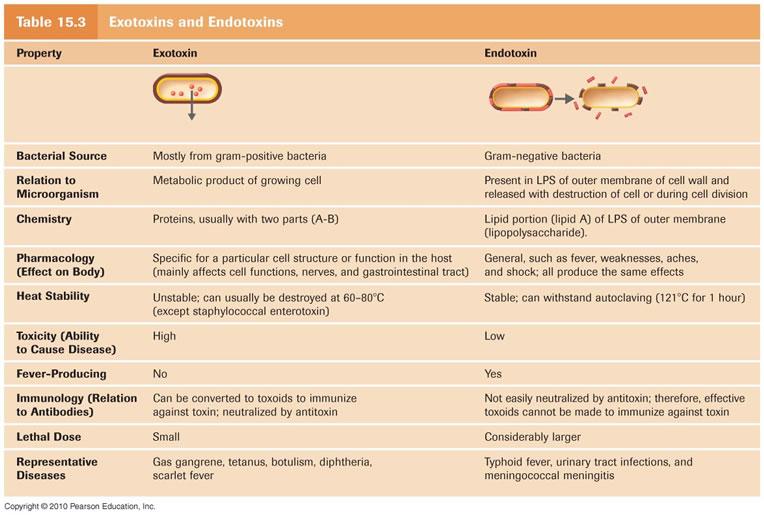 How else do microbes damage the host?

1) Using the hosts nutrients: Bacteria get iron from the host using siderophores

2) Direct damage:Host cells can be destroyed when pathogens metabolize and multiplying inside host cells.

3)The production of toxins

What are the physical and in a general sense, that along with normal microbiota constitute the body's first line of defense against pathogenic microbes?

2) Some pathogens can penetrate mucous membranes.

3) The lacrimal apparatus protects the eyes from irrupting substances and microorganisms.

5) Mucus traps many microorganisms that enter the respiratory and gastrointestinal tracts; in the lower respiratory, the ciliary escalator moves music up and out.

What are the Chemical Factors, that along with normal microbiota constitute the body's first line of defense against pathogenic microbes?

1) Fatty acids in sebum and earwax inhibit the growth of pathogenic bacteria.

2) Perspiration washed microorganisms off the skin

3) Lysozyme is founds in tears, saliva, nasal secretions, and perspiration.

4) The high acidity (pH 1.2-3.0) of gastric juice prevents microbial growth in the stomach.

How do phagocytes do their jobs?

1) circulating in the blood these include neutrophils and monocytes

2) In the tissues are macrophages, which may be wondering or fixed (lung alveolar macrophages, dendritic cells, Kupffer cells of the liver, microglia of the brain, macrophages or reticuloendothelial cells of lymphoid tissue)

Explain the process of inflammation, its cardinal signs and they're caused, including chemical mediators, processes, and results

2) Tumor- Swelling from leakage of fluid into tissues

4) Dolar-pain from swelling and some chemicals

A fifth sign sometimes present is loss of function due to swelling in joint.

How does fever benefit the host?

Mild to moderate fever is beneficial; too high may cause enzymes denaturation; pyrogens (II-1) secreted by leukocytes and macrophages exposed to for gin substances reset the brain's thermostat" in the hypothalamus

How do interferons alfa and beta "interfere with" viral infections?

Alpha and beta interferons protect other cells attacked by viruses by blocking viral replication, example They enable those cells to block the virus from taking over cellular machinery to make more viruses.

What cells make gamma interferon, and what does it do?

What is the complement system?

Complement--about 30 plasma proteins circulating in the blood plasma in an inactive state; also known as the complement system

What are the three primary outcomes of the complement system?

A. "MAC attack": forms a membrane attack complex (MAC) that makes holes in invaders’ cell membranes allowing water to rush in and cause cell lysis
B. opsonization: certain complement proteins can bind to microbes, thereby enhancing phagocyte adherence to and ingestion of the microbes; opsonize means “to make tasty”
C. enhancing the inflammatory response chemically by stimulating the release of histamine from mast cells and basophils, causing vasodilation, and by attracting neutrophils and other white blood cells

And in general what are the three ways it is activated? How does it "complement" the adaptive immune system? You need not memorize the numbers of the particular components or their individual actions, but understand the idea of cascade and amplification.

activated by
A) microbe surface polysaccharides—the cell walls of certain bacteria and fungi
B) by antibodies, part of the specific defense system; therefore it may be said to
“complement” both the specific and non-specific defenses
C) third mechanism: macrophage that's ingested microbe releases cytokines that
stimulate liver to produce lectins, proteins that bind to carbohydrate (mannose of bacterial wall,eg)-> activation of complement; and opsonization

What are the following and how do they figure in innate immunity? Lysozyme, macrophages, dendritic cells, Toll-like receptors, cytokines, opsonization, chemotaxis, apoptosis, antimicrobial peptides

Macrophages-The chief phagocytes are macrophages "big eaters" which derive from white blood cells called monocytes that leave the bloodstream, enter the tissues and develops macrophages.They wander throughout the tissue spaces in search for cellular debris of "foreign invaders".

Dendritic Cells- Protective cells that phagocytize antigens, migrate to lymph nodes, and present the antigen T cells, causing them to activate and mount an immune response; called epidermal dendritic cells or langerhans cells in the skin.

Cytokines-can increase the inflammatory response and activate B and T cells; A small protein released from human cells that regulates the immune response, directly or indirectly may induce fever, pain, or T cell proliferation.

Opsonization- certain complement proteins can bind to microbes, thereby enhancing phagocyte adherence to and ingestion of the microbes; opsonize means “to make tasty”

Chemotaxis- is the chemical attraction of phagocytes to microorganisms. Book definition- Movement in response to the presence of a chemical.

Apoptosis-cutting of genome, blebbing, digestion, calling in of phagocytes--intra-cellular contents, including pathogens are not released

Antimicrobial peptides-recently discovered and found in most forms of life; over 600 identified to date; produced in humans by neutrophils, macrophages, platelets, and epithelium; names generally end in -in as in defensins; have less than 100 amino acids and usually a positive charge which facilitates disruption of microbial membranes which have negative charge; may block viral receptors and target intracellular targets in bacteria, such as nucleic acid and protein synthesis; resistance to them does not appear to develop; also stimulate or participate in other immune functions such as attracting dendritic cells and stimulating mast cells to release histamine; even sequester endotox

Know in general the ways antibiotics work against bacteria

*The antimicrobial drug must not interfere with essential functions of the microbes host.

Know in general the defenses against them bacteria have developed.

*The mechanisms of bacterial resistance to antibiotics are limited. Knowledge of these mechanisms is critical for understanding the limitations of antibiotic use.